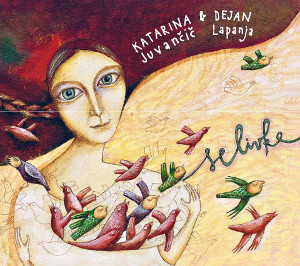 Selivke (Migratory Birds in English) is a collection of songs about the female gender in all its strength and vulnerability. “Each song tells a tale about women set in different situations and circumstances, using diverse musical ideas. The music is essentially rooted in Slovenian folk forms but weaves all sorts of other music influences.” (Cooney) The audience and critics in Slovenia and abroad have praised the album.

“Migratory birds travel through a particular area, but do not nest or spend winter there”. They travel in a flock, but each on its own. They fly towards the same destination – towards life and sometimes towards death. The road towards one or the other is equally long.

Migratory Birds CD is my tribute to female power, courage, wisdom and spirit.

And to men who love them because of this.

1. ČEŠNJEV CVET/CHERRY BLOSSOM tells a story about a young partisan who convinced an entire wagon of women to jump off a train bound for concentration camp.

(Chorus: Jump now, Milka, jump now Mary, don’t ask if it’s right or if you can, this train won’t stop for no one, this train has a deadly plan)

2. VOLČJE NOČI/WOOLF NIGHTS tells a story of a woman fighting with her demons (of depression, solitude, oblivion). The only way to silence them is by singing.

(Chorus: What do angels dream at night? Whose kisses are most tender and light? Burn me and scatter my ashes for the spring, for birds and bottles of wine, let me fall, I’ve already hit the hard line.)

3. USPAVANKA ZA FRIDE/ LULLABY FOR FRIDAS – Katarina wrote this song in the most strenuous days of her life – to soothe herself and all the women who tremble between life and death. And also for Frida Kahlo.

(Chorus 1: May those arms gently rock me/Living waters wash away /Great black hole that swallows limbs/Of a body that no longer screams.)

4. EPITAF ZA LAHKOŽIVKO/ EPITAPH FOR A LIGHTSKIRT is a posthumous credo of a rather self-indulgent lady (lady of the night) in which she settles the score with her former lovers and a small-town morale.

(Excerpt: Come closer now, you lauded family man, and you, gloomy little fellow, and you, hairy devil, let me pour you some cognac one last time….. RIP my rolled up skirt, wet dreams of rascals and my primer… RIP my rude laughter, what I have done - well, that wasn’t a sin!)

5. UEJ UEJ (MAGDALENCA) is based on a folk song called Magdalenca (Magdalene) – a girl that sits on a mountain and waits for someone to come and marry her. Not entirely pleased with the outcome of the folk song ending Katarina wrote the second part where she explains what would happen if the man in question did arrive (she would have to iron his ties, wash his pants, go to church, pray, be obedient and quiet). The song contains samples and loops from traditional singers singing the song Magdalenca and Katarina’s grandmother.

6. MENE NEMA/ I DO NOT EXIST tells a story of an Erased mother of two and her eight years and two months long struggle to survive under inhuman circumstances. It is written in Serbo-Croatian language, as most Erased people came from ex Yugoslavia (check Wikipedia).

7. PISMO V KANADO/A LETTER TO CANADA is based on a letter Katarina’s dying 29-year old great-granny wrote to her husband Franz who was a migrant worker in Canada at the time (late 1920s). Katarina used her great-granny’s words to tell the story of her hardship and love towards her husband, children and the croft.

(Excerpt: My dear Franz, if you only knew how hard it is/ people say I have to write for you/ but I rather see, with all the eyes I have/ that you stay there and earn a bit more/ it would be better for the family)

8. BALADA O ROZKI IN VRTNEM PALČKU/BALLAD OF ROSE AND A GARDEN GNOME is based on a crime section story Katarina read years ago. A “family guy” raped young woman, was put to the trial and then claimed it was her fault as she was dressed inappropriately for a woman her age. Katarina instantly thought of him as a gnome (very popular garden accessory in Slovenia) and her story developed from there. It is pretty ironic (contains a rather swell imitation of a sexual act sung by a well known Slovenian experimental singer Irena Tomažin as well as a mobile phone recording of a taxi driver in Chinese city Guangzhou). In the end Rose figures out she will never win her case in court as a garden gnome pleads “not guilty”, so she kills him and ends up in prison herself….With a new garden gnome she bought in a convenience store.

9. LILIJA, VRTNICA, GLICINIJA/LILLY, ROSE, WISTERIA tells a story about Slovenian women called Alexandrian women (check Wikipedia) and their daughters and is based on one particular dream Katarina learned from a documentary. It was narrated by a daughter of such Alexandrian who got abandoned by birth (her mother took off to be a wet nurse in Egypt while her father was absent most of the time) and as a young woman ended up in concentration camp in Auschwitz. There she dreamt that she found herself in Egypt and approached a big white house where she saw her mother on the doorstep with a bottle of water in one and a bottle of wine in the other hand. Suddenly a big bird appeared and her mother tied those bottles to bird’s wings and asked the bird to take them to her daughter who was in Auschwitz. She described the bird’s journey vividly and when it finally flew to the barracks she woke up. Katarina found these dreams and her story so poignant that she knew she had to write this song. The song is written in a form of a dialogue, telling a story about the complexity of a mother-daughter relationship. “Mum bits” are sung by Bogdana Herman – a legendary Slovene folk singer.

10. SPOMINČICA/FORGET-ME-NOT tells a story about a relationship between a grandmother and her granddaughter. The first is drifting away with dementia while the granddaughter tries to reconnect with her through songs they used to sing together. A chorus has been inspired by powerful Bishop Brent’s words on dying.

(Chorus: Where you go now I can’t follow/ I’ll stay here, caress the day, guard the swallow/From the high mountains I hear a cry: Come, don’t bide!/May this boat take you safely to the other side)

Illustrations are the work of a talented young illustrator Tinka Volarič. Each story and each female character is accompanied by her hand painted portrait and hand written lyrics.