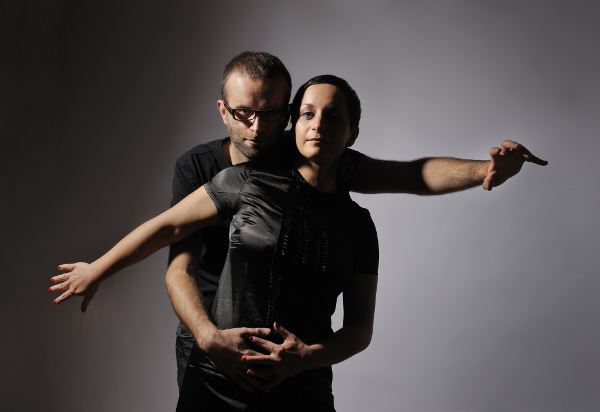 Katarina Juvančič (singer-songwriter, music writer, music anthropologist) and Dejan Lapanja (jazz guitarist, producer, drummer) – singer-songwriting duo, made their first appearance on the Slovenian music scene at the end of 2009 when they presented their folk rock song Uej, uej (Magdalenca) on the Slovene National Radio’s newcomers contest. As one of the contest’s best bands they also performed at the closing event in Kino Šiška, one of Ljubljana’s biggest and most prominent concert venues. In June 2010 and August 2012 they were awarded at the Slovenian songwriting competition called Kantfest. This success has been followed by a tour around Slovenian music festivals and they have also performed in Sarajevo (Bosnia and Herzegovina) and Graz (Austria).

Their music is often described as alt-folk as Katarina’s lyricism portrays a rich expressive world of female sentiments, bridging modern trends and more archaic folk influences and sensibilities. Her counterpart, Dejan Lapanja, a versatile musician and producer, who has learned the ropes in acclaimed Slovenian bands, Olivija and Bast, completes the duo. Alongside with composing and performing his own music, he also currently plays with the globetrotting world-jazz attraction Vasko Atanasovski Trio, avant-garde music collective Salamandra Salamandra and with the renowned Slovenian singer Severa Gjurin. He has also appeared as a guitar soloist in Laibach’s project with RTV Slovenia Symphony Orchestra called Volkswagner (2009).

Following the release of their debut album Selivke (Migratory Birds - see Album Notes) the duo embarked on a Scottish tour in August 2012. In mid-September they were performing at the Playing for Integration/Acoustic Music Festival in Tallaght (South Dublin, Ireland) and in various venues in that area. In 2013 they were performing in Slovenian concert halls and festivals as well as in Croatia, Serbia and Scotland.

At the beginning of 2014 they embarked on another exciting journey by creating a new album in English entitled Hope’s Beautiful Daughters (HBD) which celebrates Katarina’s long term involvement with Scottish music scene (as a researcher, journalist and musician). It celebrates friendships that have been forged during this period as well as female’s power, courage, wisdom and love that shaped the history and our time. Songs about Frida Kahlo, Rosa Luxemburg, Irene Sendler and Inuit legendary women, performed by well known Slovene and Scottish musicians (along with the folk stories about women told by the most prominent Scottish storytellers) are the core of this new project. The album was released in August 2014 and received substantial media attention in Slovenia, Scotland and in the Balkans.

In the autumn of 2014 Katarina & Dejan were busy promoting Hope's Beautiful Daughters in Scotland and Germany, in January 2015 they launched an album with the band in the most prominent concert venue in Slovenia - Cankarjev dom. In the summer of 2015 they introduced HBD album to Indian and Sri Lankan audience, as well as the one in Austria, Scotland, Serbia and Croatia. In 2016 they gigged around Croatian coast and some summer music festivals in Slovenia, and released their third album Vmesje on the New Year's Day of 2017.

In May 2018 the duo played in Kyrgyzstan and embarked on their fourth Scottish tour in late August whilst working on the new original album due for release in late 2019, when they will celebrate their 10th anniversary.