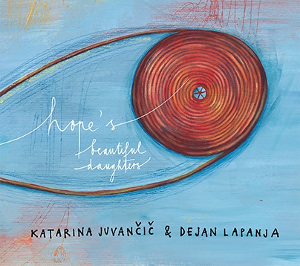 This Slovenian-Scottish collaboration - the first of its kind - was initiated by Katarina Juvančič & Dejan Lapanja. The pair teamed up with the prominent Scottish musicians and songwriters Karine Polwart, Paul Tasker (Doghouse Roses), Fiona Cuthill (Raintown, Rallion), Seylan Baxter (Tattie Jam) as well as some of the country's finest storytellers (Lawrence Tulloch from Shetland, Tom Muir from Orkney and David Campbell from Edinburgh) to realise the album's ambitious content. Regular Slovenian collaborators Matija Krečič (fiddle), Klemen Krajc (double bass), Gašper Peršl (drums), and the Salamandra Salamandra band also feature, cementing a true cultural exchange. Together they have developed the project, inspired by St. Augustine's contemplation on hope, anger and courage. Talented ladies Tinka Volarič (illustrator) and Jerneja Rodica (designer) took care of the visual imagery of the album. It depicts anger and courage as dynamic entities, spinning eternally around our worlds. Shaping us as human beings and societies, as well as our ability to hold and mould them or change their trajectories if necessary with our strength. And love.

It all started with these words…

Hope has two beautiful daughters. Their names are anger and courage; anger at the way things are, and courage to see that they do not remain the way they are.

Hope’s Beautiful Daughters is a celebration of the female gender in all its beauty, mystery, wisdom, strength and vulnerability, and the friendships that nurture them in this world.

Irena tells a story of a little boy saved by Irena Sendler, a Polish nurse who smuggled more than 2,500 Jewish children from the German-occupied Warsaw ghetto during World War II.

This song was inspired by Skeleton Woman, a tale of the Inuit people I found in a book by Clarissa Pinkola Estés called “Women Who Run with the Wolves”.

A folk tale from the Hebrides that tells of a courageous journey to wisdom (The Dreammaker), told by David Campbell.

I wrote this song in the most strenuous days of my life – to soothe myself and all the women from the hospital ward, trembling between life and death. And also for Frida Kahlo.

An Orkney folk tale (Ursilla and her Selkie Lover) depicting a rather unusual and bold way to find love, told by Tom Muir.

This song depicts an Inuit legend Sister Sun Brother Moon that was collected by the German-American anthropologist Franz Boas and published in his monograph “The Central Eskimo” (1888).

This Slovenian-Scottish version of a Scottish song called Mickey’s Warning/Blue Bleezin’ Blind Drunk was arranged by Karine Polwart and Katarina Juvančič. Abuse of women knows no linguistic barriers and neither does the courage to leave.

Shetland folk tale (Mallie and the Trow) about kindness of heart in the midst of great poverty, told by Lawrence Tulloch.

Rosa is based on the book “The Letters of Rosa Luxemburg” and it pays a tribute to her feisty, passionate, sparkly, proud, untamable and profoundly sensitive spirit.

Katarina & Dejan would like to thank the Ministry of Culture and Municipality of Cerknica for their financial contributions, Sean Lewis for recording Tom, Bob McGeady for recording Lawrence, Mike Wilson for proofreading the booklet and to all hope’s beautiful daughters and sons out there, fighting for a better world for us all.

Most heartfelt gratitude goes to all our talented friends from Scotland and Slovenia who poured their hearts and souls into the songs and stories. Especially to Karine Polwart who helped Katarina put the final touches to the lyrics and who introduced us to St. Augustine’s Hope’s beautiful daughters in the first place. xx

We hope the album finds its way to the people who appreciate its message(s) and meaning(s) and feel all the love that made this project possible. ... But then again, the right stuff always finds the right people. ;-)